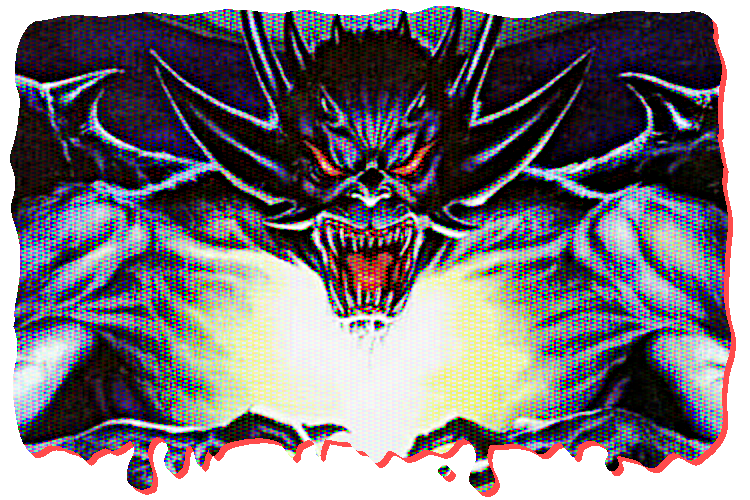 - Urotsukidoji: Legend of the Overfiend Review -

Every time I used to go into my local CEX, I would see this one DVD sitting there with a strange title and the coolest box art I had ever laid eyes upon, what could it be? I never picked it up since I never usually had ID on me but everytime I came back it would be there, for months and months it sat there.

I cant take it anymore, what the hell was this film? Urotsukidoji? Sounds cool... oh... its only the most violent and disturbing thing japan has done since Unit 731.

Yes, thats right reader, all the nasty stereotypes about japanese animation are present here, intense gore and violence, an uncomfortable ammount of rape scenes and sexual abuse and a plethora of other subjects when watched will most definately put you on some sort of government list.

I mean where do I even start with this one? Right, plot. Lets start there.

Down on his luck high school student, Tatsou Nagumo is relentlessly bullied by everyone, the jocks, the pretty girls he oogles over and even his crush, yet an ancient power lurks within Tatsuo that could spell the rebirth and merging of the demon world with the human world and half breeds and everything inbetween.

From there its a mad dash from half demon Amano Jyaku, his imp and his sister to make sure this ancient power doesnt fall into the wrong hands...

Spoiler Warning: Everthing goes wrong and everybody who was fighting to have the ancient power unlocked for universal peace is suddenly shocked that a previously doccumented rapist, murdering ancient evil is hellbent on destroying humanity, who woulda' thunk it?

Now... after all of that horrible stuff mentioned I just have to say that with the dub, this is one of the funniest animes I have ever seen, just the strange timing of the dialouge and the obherent, relentless and out of control swearing that comes out of nowhere, it gives the Riki-Oh dub a serious run for its money.

I almost dont want to review this film, knowing less about it makes it all the more stranger but if you are looking for something decent all the way through then you might be dissapointed. The last 30-40 minutes drags to a crawl and dialouge and plot repeats over and over just for a brick walled cliffhanger ending.

Final Rating? Uh... I dont know actually. Technically this is a poorly paced, unapolagetic and slogish film but il be damned if it isnt entertaining, especially with the dub which is a must have.

There is such an influx of retro styled games these days but most take modern improvements into accountability with an array of sprite variation and gameplay inovations that kind of feel almost perhaps not too invocative of the original spirit of the retro mindset in a way.

Not that its a bad thing as theres certainly a place for that in a lot of scenarios. But where Kero Blaster shines brightest is in its ability to really capture that old school essence and charm of its simplicity.

Every enemy, hazard and obstacle is expertly placed with various ranges of difficulties as the game ramps up and certain situations play on the mechanic of using the correct weapon at your disposal. Aside from a brief introduction on each weapon, Its never really fully pointed out to you what exactly you should be using them on, it gives subtle nods to what would work best and soon you will be swapping through weapons mid gameplay to certain enemy types that are vulnerable and... it just works!

Its such a rewarding system when it all comes together. Same with the way you can progress yourself throughtout the ongoing ramping enemy crisis: Nearly all Enemies have a chance of dropping coins or hearts to refill your container and bigger and stronger enemies usually have a almost garenteed drop rate of big bags of cash to help balance the risk and inconvinience of taking them down. You can grind enemies and screens for coins at your leisure and upgrade them for either weapon upgrades or health upgrades (both you will deffinately want to do unless you are a sadist). And the option is nice besides progression because if you fail a stage or die to a boss and run out of lives, you can allways restart the stage again with increased firepower, health and nowhow. Progression is entirely up to you, you could beat the game with no chosen shop ugrades if you wish, allthough thats something a crazy person is likely to do as the game is ball bustingly difficult in that old school design.

Deaths or hits to your froggy protagonist allways feel like its your fault and never usually due to bad design. This also instills a certain playstyle that the devloper has clearly intended with the addition of falling chandeliers to make you more cautious of your suroundings instead of becoming a charging overpowered bull. In this sense, weapons dont allways make the game easier.

Another aspect of the old school design philosophy is how condenssed this game actually is. I kid you not, I downloaded it through Steam in less than 10 seconds. Its just built as minimal as possible and reffined and mwa, so good. But no game is perfect, there are some tiny flaws but despite that the charm really masks that in this situation. First up:

- Boulders: There are certain situations where you need to outrun boulders but the problem is, they are faster than you so if you dawdled a second or two before coming into a long hallway chase by said boulder, thats it. One hit kill, go restart the screen until you get the speed right. Scripted sequences like this can really kill the vibe, you usually can predict where they will fall from and appear due to the particularly ominous and dauntingly empty level design.

- Backwards Movement: You can shoot whilst walking backwards which is allways handy and especially after your walk speed remains the same. What makes it difficult for me is that you need to stop, then turn around to pull it off which can be a problem when you are being chased by an enemy and are in a tight situation. It gets better later on with more player practice and a more open level design however. I understand why it was done however as the controls are intended to be simplistic with only 6 buttons ever really being used (w,a,s,d + z,x) but maybe a quick turn but it still can trip you up occasionally.

- Unavoidable Boss Patterns: On retrospect, maybe this game isnt so perfect which is the case with the bosses in the game, they are large, usually spawn smaller enemies and often have unavoidable attacks as you are crammed into a corner in a vain hope that the projectiles will burn out from time and for a few occasions can make for a cheap feeling fight.

- Inch Space Platforming: In a few and I do mean few areas as the platforming is generally solid and weighty but still not too grounded or floaty, there are platforms that barely have any wiggle room and with the player not being able to fully go vertically as high if they were walking compared to standing still, it can feel a bit rusty and choppy. Which I can see where the dev may of come from if it was intentional by having it be secretly benificial by getting the player to focus on the dangers of charging on to periless heights with bottomless pits.

Rating? Go Play it, it's a nice condensed and polished experience with charming graphics and a very satisfying gameplay loop.